When George Mason University alum Miriam Van Scott, BA English ’92, was working as a freelance writer in the mid-1990s, she was researching an article about the afterlife and frustrated by the resources she was using. She realized what she needed was a compendium of all things related to the netherworld—so she wrote one. The result was the “Encyclopedia of Hell” (St. Martin’s Griffin, 1998). She followed it up with the “Encyclopedia of Heaven” in 1999.

Over the course of her career, Van Scott has provided content for the History Channel, Sy-Fy, The Learning Channel, ABC News, Paramount Entertainment Group, and others, and she has written more books. Her research into the afterlife yielded more material than could ever fit into the “Encyclopedia,” and she recently revisited some of that content for her latest book, a young adult novel titled “Bandun Gate” (Dark Stroke, 2022).

Van Scott’s research and writing about the dark side of things makes her a popular podcast guest, especially around Halloween. We recently talked to her about what it means to be an authority on Hell.

How did you come to write the “Encyclopedia of Hell”?

I was researching an article about afterlife beliefs—pre-internet, and it took forever. Finding the specific information I needed required digging through dozens of sources—religious texts, myth stories, art studies, pop culture works, movie books, etc. I kept thinking how much easier it would be if there was a single source that encompassed Hell interpretations across all different categories. A reference book like that didn’t exist, so I wrote one.

Encyclopedia of Hell was compiled when the internet was still in its infancy, so most of the research was done via original sources and interviews. I spoke with exorcists, former cult members, clerics of many different faiths, artists, authors, film directors, law enforcement and others who had something to contribute. My favorite interview was with Clive Barker, author and director of the films “Hellraiser,” “Candyman,” “Books of Blood,” etc. He gave me some fascinating insight on why people are obsessed with the underworld, and when “Encyclopedia of Hell” was published, he even sent me a nice handwritten “congratulations” note.

You have said in interviews that some of your interviewees cautioned you on delving into such topics? What were their warnings, and do you do anything to protect yourself? 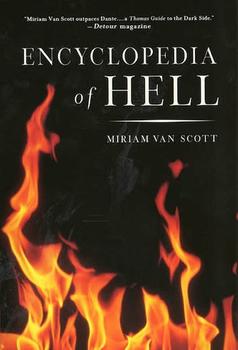 While I was researching the encyclopedia, several people warned me that delving into such dark subject matter could have ugly consequences. A detective who investigated “Satanic” crimes said the details and photos he was sharing would likely give me nightmares. They did. And a priest advised me against toying with Ouija boards or “conjure” rituals, noting that lighthearted experimentation offers the perfect “in” for demons hoping to wreak havoc. Friends and family simply worried that spending so much time learning about tortures of the damned would take an emotional toll. My strategy for dealing with these perils was to limit the time I spent on the truly horrific stuff, have as little interaction as possible with anything provocative, and pray often.

Was there anything in the research that surprised you?

One of the biggest surprises was how willing people were to share their own personal, often graphic stories about practicing witchcraft, seeing ghosts, indulging in “demonic” orgies and other disturbing behaviors. It amazed me how, when I told people I was writing a book about Hell, the response I often got was, “Have I got a story for you!” followed by eye-popping accounts, most of which I couldn’t use in the book for a variety of reasons. On the other side of the spectrum were those who looked at me like I was psychotic when they learned of my book’s topic. One woman even suggested I undergo past life regression therapy to determine if I’d been a serial killer in a past life.

You moved to Charleston, South Carolina, a city you have called "haunted." Was the move intentional because of the area's history?

Our family began vacationing in Charleston, South Carolina, in 1997. We loved everything about the city, including its eerie history. I’ve always enjoyed exploring the area and discovering the dark secrets hidden in Charleston’s shadows. Getting up close and personal with the ghosts was definitely part of the draw that brought us here.

The cover of your latest book, “Bandun Gate,” says it is "inspired by true events," can you tell us about that?

In addition to using real interviews and data from my Encyclopedia of Hell research, “Bandun Gate” also incorporates actual people and events into the storyline. These include a Charleston woman who was so evil no cemetery would agree to accept her body for burial, Gullah legends of ghosts who steal and “wear” the bodies of unsuspecting victims, and an actual gate I came across that was constructed to keep out evil spirits. The overall plotline involving my daughter being in terrible danger was inspired by a frightening phone call informing me she’d been kidnapped and would be dismembered then sent back to me in pieces.

Yes, she is okay! At the time I got the call Abigail had been kidnapped, she was working as a jail guard, and there were some pretty hardened criminals and gang members who threatened her on a regular basis. Luckily the abduction turned out to be a hoax. She is doing well and currently works in law enforcement in the Charleston area.

What are you working on now?

I’m currently working on a young adult suspense novel about a 16-year-old girl who claims her younger brother has a very unusual paranormal ability. Their father thinks it’s a delusion she’s invented to cope with her mother’s death. When the boy is implicated in the death of one child and disappearance of another, the family’s dark secrets are revealed, forcing them to deal with the disturbing fallout.

To learn more about Van Scott’s work, visit her website at miriamvanscott.com.