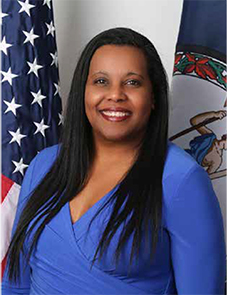 Charniele L. Herring, who attended George Mason University through an outreach program for first-generation students and went on to launch a barrier-breaking career in Virginia state politics, will be the featured speaker at the university’s 53rd Commencement next month.

This year, Herring became the first woman and the first African American to be named majority leader of the House of Delegates.

Herring, who for a time in high school lived at a Northern Virginia homeless shelter, participated in Mason’s Student Transition Empowerment Program (STEP), which recruits and retains talented students from underserved backgrounds. She later earned a law degree from Catholic University.

Representing the 46th House District, in the Alexandria area, Herring is chair of the Courts of Justice Committee and the State Crime Commission. She has introduced or guided legislation related to social justice, education, small businesses, the environment, substance abuse prevention and treatment, and other issues. She also founded the Virginia Legislative Reproductive Health Caucus.