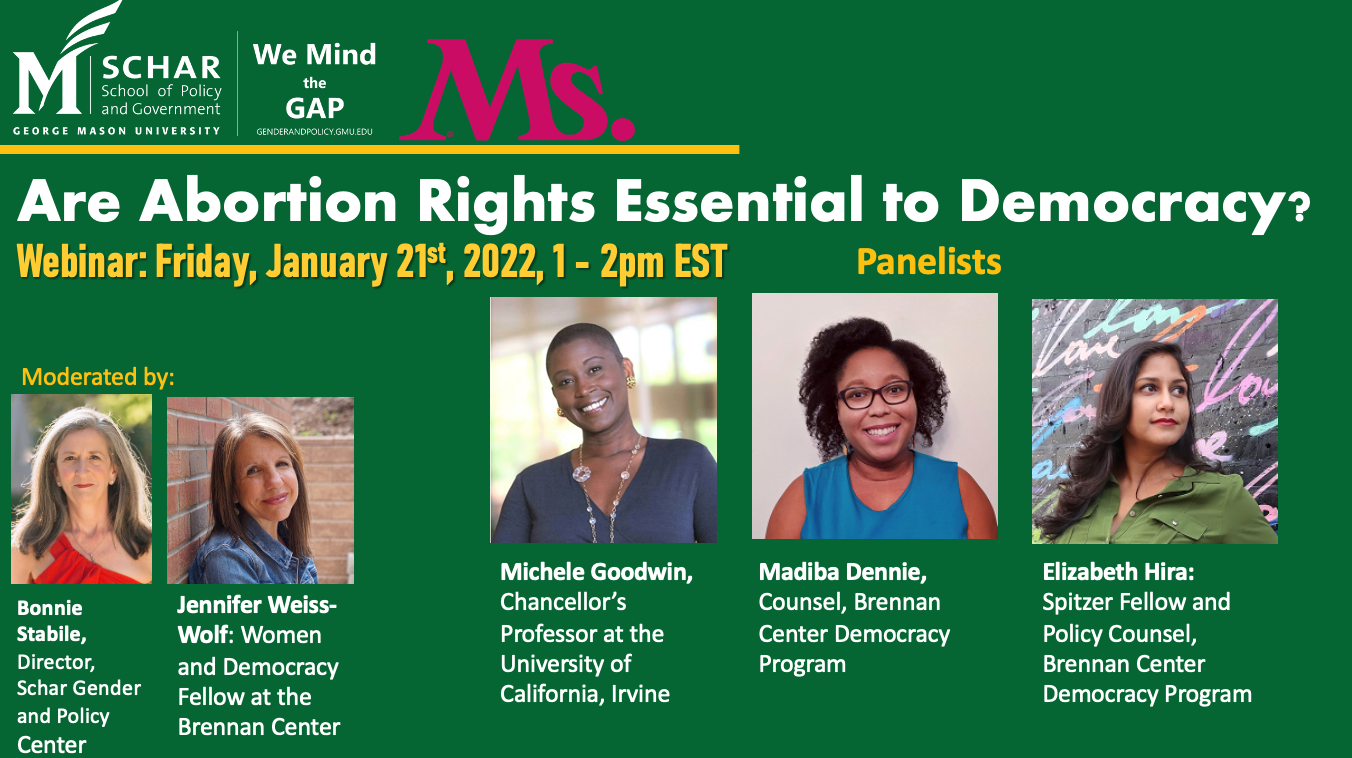 The spring semester at the Schar School of Policy and Government begins with a timely and important discussion about two major hot button issues facing policymakers in 2022—women’s reproductive rights and the assault on American democracy.

The program, Are Abortion Rights Essential to Democracy?, is sponsored in part by Ms. Magazine and hosted by the Schar School’s Gender and Policy Center (GAP). The hour-long webinar takes place on Friday, January 21, at 1 p.m., and is open to the public.

GAP Director Bonnie Stabile co-moderates the discussion—followed by questions from spectators—with Ms. contributing columnist Jennifer Weiss-Wolf, who is also Women and Democracy fellow at the Brennan Center for Justice.

The conversation comes at a divisive time in American culture. “As women across the country face the prospect of having their constitutional rights and reproductive autonomy curtailed,” said Stabile, “this panel will consider the question of whether and how reproductive autonomy has bearing on representative democracy, as well as tackling broader questions of justice and equity.”

Among other topics, experts from the Brennan Center for Justice’s Democracy Program and the University of California, Irvine, will discuss the implications of Texas abortion law SB 8 and the Dobbs v. Jackson Women’s Health Organization case which has the Supreme Court considering the constitutionality of a Mississippi law that directly challenges the precedent of Roe v. Wade.

Dennie and Hira have written about the danger of criminalizing pregnancy outcomes and how the Texas and Mississippi laws that now threaten Roe are part of a long history of regulations controlling women in the U.S., including laws governing property, marriage, and reproductive rights.

Co-moderator Weiss-Wolf, a menstrual equity advocate and author of the book Periods Gone Public, has expressed that a lack of menstrual literacy on the part of mostly male policymakers has led to laws such as the Texas six-week ban, which prevents abortion when most women are unaware that they are pregnant; it also promotes faulty scientific interpretation using the "fetal heartbeat"-moniker for the bill.

Are Abortion Rights Essential to Democracy? takes place on Friday, January 21, at 1 p.m., and is open to the public.