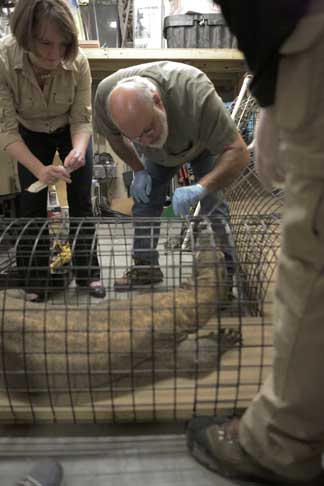 Inspired by the Komodo dragon blood’s germ-fighting abilities, George Mason University researchers have created a new way to kill antibiotic-resistant bacteria while spurring the body’s cells to heal cuts faster, according to new research published in the Nature-partner journal NPJ Biofilms and Microbiomes.

The work is the result of a $7.57 million contract from the federal government’s Defense Threat Reduction Agency (DTRA) to discover new bacterial infection-defeating compounds in the blood of Komodo dragons and the crocodilian family of reptiles, which includes American alligators. These reptiles eat carrion and live in bacteria-rich environments but rarely fall ill, suggesting they have strong innate immunity.

“Synthetic germ-fighter peptides are a new approach to potentially defeat bacteria that have grown resistant to conventional antibiotics,” said microbiologist Monique van Hoek, who worked with Mason chemistry professor Barney Bishop on the project. “The antimicrobial peptides we’re tapping into represent millions of years of evolution in protecting immune systems from dangerous infections.”

Under the DTRA grant, the Mason team’s research initially is designed to help soldiers heal faster and protect them from bacterial bioweapons. And as with many products developed for the military, it could eventually also be available in bandages sold at corner drug stores to help heal more mundane cuts and scrapes.

The inspiration for Mason’s synthetic germ-fighter called “DRGN-1” came from a peptide first found in a Komodo dragon named Tujah, which means seven in Indonesian, who lives at the St. Augustine Alligator Farm Zoological Park in Florida. Tujah was the seventh in his litter.

After creating a new tool and technique to find and sort through hundreds of peptides in Tujah’s blood, the George Mason team discovered one that showed a promising combination of antimicrobial and anti-biofilm properties. Peptides are small protein-like molecules, and some act at the forefront of our body’s innate immune system. They’re the molecules doing battle with infections until antibodies are made.

The researchers found more than 200 Komodo dragon peptides, and it was one of these peptides that provided the inspiration for DGRN-1.

The research team rearranged the peptide’s tiny building blocks, called amino acids, to create a modified, synthetic version of the dragon’s peptide, calling it “DRGN-1” in honor of the Komodo dragon. This synthetic peptide is the first Komodo-inspired peptide the team created in the lab from this research, van Hoek said.

“The synthesized peptide DRGN-1 is not a Komodo dragon’s natural peptide; it’s been altered to be stronger in terms of both potency and stability,” van Hoek said.

DRGN-1 is able to attack the sticky biofilm that protects the bacteria and helps them grow in wounds. After breaking down the biofilm barrier, the synthetic peptide kills the bacteria while simultaneously stimulating the patient’s cells to speed up healing the wound.

“The next steps for DRGN-1 are to develop it into wound-healing products for veterinary medicine before moving to products designed for humans,” Bishop said.

Van Hoek and Bishop founded Antimicrobial Discovery Research  in the College of Science to further the research.

The DTRA grant, which includes van Hoek, Bishop and Joel Schnur, has led to numerous research papers, even more peptides under investigation, and a patent portfolio. Along with the American alligator and Komodo, the Mason team has looked at other reptiles including gharials, salt-water crocodiles, Chinese alligators, and Siamese crocodiles. The five-year grant wraps up in February 2017.

The Mason researchers also count the St. Augustine Alligator Farm Zoological Park as a collaborator. Van Hoek helped assess Tujah in his cage when she visited and helped the vet draw blood from an American alligator.

“I definitely didn’t get that close with the Komodo dragon,” van Hoek added. “They are very dangerous.”