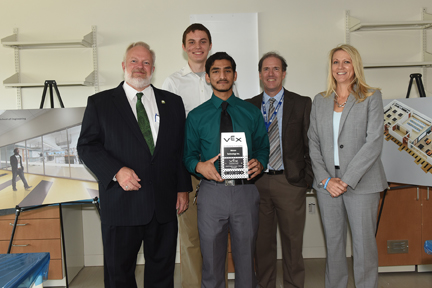 Micron’s donation was the latest chapter in the mutually beneficial partnership between George Mason and the Boise, Idaho-based global leader in the semiconductor industry. The gift, which is part of Mason’s comprehensive $500 million “Faster Farther” campaign, will underwrite the renovation of existing general purpose space into a state-of-the-art characterization and fabrication lab in Bull Run Hall at Mason’s Science and Technology Campus. The 1,100-square-foot lab will be called the Micron Technology Innovation Lab.

“It’s really going to have an amazing impact on our programs in the Volgenau School of Engineering,” Dean Ken Ball said at Wednesday’s event commemorating the donation. “We’re really excited about this.”

Volgenau’s nearly 7,500 students this academic year will account for roughly one-fifth of Mason’s entire student enrollment, Ball said. Mason’s Mechanical Engineering Department, which includes a very heavy lab component for its students, will number nearly 350 students this school year. That program, in particular, will make use of the added lab space, Ball said.

The newly renovated lab is one of three distinct spaces in a larger laboratory suite. The hope is that the suite’s open design will encourage creativity, free-flowing exchange of ideas and collaboration among students and faculty in varied departments, including mechanical engineering, electrical engineering and computer engineering, Volgenau officials said.

“This is really filling a need,” Ball said.

Micron has been a major supporter of engineering, STEM education and other programs at the university for more than a decade. Mason’s Science and Technology Campus in Manassas is conveniently located near one of the company’s largest manufacturing facilities, allowing for a greater partnership between Micron and Mason students and faculty.

Josef Spanbauer, a former Northern Virginia Community College student transferring to Volgenau this fall, praised Micron for its financial support of the Mason robotics team. Spanbauer is a member of the team, which recently finished third in the world in a competition.

“I’ve seen firsthand what Micron’s support can do for us,” he said.

“Investing in students like you guys is our top priority,” she told Spanbauer.

Construction of the lab is expected to be completed in mid-August. When completed, it will also serve as a location for outreach programs designed to encourage K-12 students to pursue STEM studies.