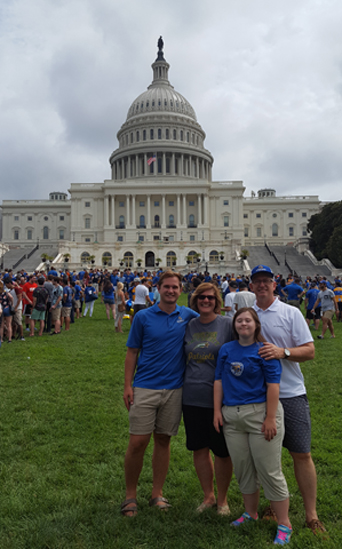 Luke Miller (left) reunites with his mother Billie, sister Mary and father Frank in Washington, D.C. at the conclusion of his summer as a crew member for the Journey of Hope 2017. Photo provided.

This summer, Luke Miller found himself far from his home in Hampton, Va., and on a 4,330 -mile journey across the United States. Miller was traveling the country with a goal of raising awareness about people with Down syndrome, like his sister, Mary, and those with other disabilities.

Miller, a rising senior at George Mason University majoring in human development and family science, traveled across the United States as part of Ability Experience’s annual summer event, Journey of Hope. The cross-country bicycle trek began in May with starting points in three cities on the West Coast. Cyclists and support crews ended their 67-day journey together in Washington, D.C., in August.

As a volunteer relations coordinator and crew member, Miller said he had many assignments, including driving the support vans that rode along with the riders.

The journey also included 40 “friendship visits” with people with disabilities and their supporters, he said. On some of the visits he was able to use American Sign Language, a skill he learned at George Mason.

For instance, during a friendship visit in Sedalia, Mo., Miller said a woman caught his attention because she was one of the only few not dancing at a dance party. It turned out that she was deaf and he was able to help her communicate with those around her.

“It’s just the little things like that,” he said. “To help them engage in conversation, it was touching.”

Word got out about Miller’s ASL ability, so other participants started introducing the deaf and hard-of-hearing people they met to him.

The 21-year-old said it was his academic advisor at Mason who recommended he take sign language.

He excelled at learning the language, said Kelly Little, a sign language instructor at Mason who taught Miller.

“I really enjoyed having Luke in my class. He wanted to be able to communicate effectively as much as possible with his sister,” she said.

Luke has a “gentle spirit” and is kind of shy, but he is a master of facial expression and body language—both key parts of communicating with ASL, Little said.

This semester, Miller is taking his third and final ASL course at Mason. 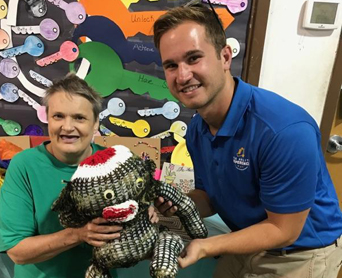 Journey of Hope TransAmerican Teams’s Friendship visits included this one to a manufacturer in Sedalia, Illinois that employs adults with intellectual disabilities, where this woman proudly displayed her handiwork to Luke. Photo provided.

“I want to be an occupational therapist. They say knowing sign language is really helpful for teaching people with autism and Down syndrome,” he said.

Miller said he attended therapy sessions with his sister, now 15, when they were growing up and remembers how helpful ASL was to her.

In August, a few weeks before fall classes began, the group of bikers and Ability Experience volunteers arrived at the U.S. Capitol, finishing their journey after some 80 days on the road.

“It was nice to have the feeling of being home. It was nice to see my sister. She’d made [an I love you] sign for me,” he said. “It’s a sense of feeling fulfilled.”

Miller, a former Eagle Scout, participated in the event through the Mason chapter of his fraternity Pi Kappa Phi.