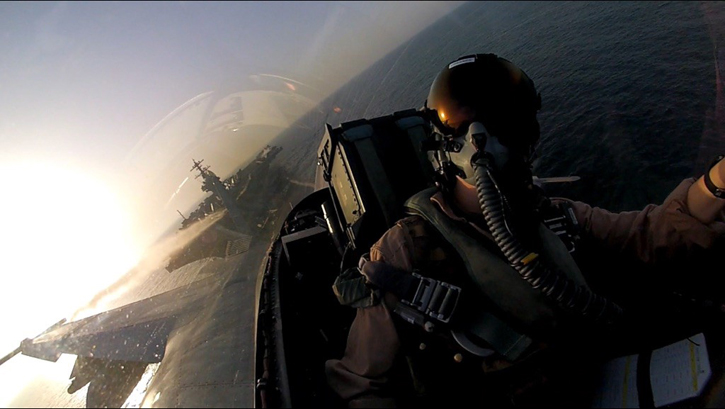 Caroline Johnson took part in the 'Coming Home' project and is now training to become a moderator for the project. Photo courtesy of Caroline Johnson.

Helping those who served in the armed forces learn to freely express their feelings is the goal of the “Coming Home” project, directed by George Mason University’s Jesse Kirkpatrick.

Kirkpatrick, the assistant director of the Institute for Philosophy and Public Policy within George Mason’s College of Humanities and Social Sciences, said it’s “immensely gratifying” to be able to provide military veterans the opportunity to explore the moral, psychological and spiritual impacts of the conflicts in which they have engaged through the use of the humanities.

“It’s the least I can do to give back to the 1 percent who do serve,” said Kirkpatrick, who co-directs the project with Edward T. Barrett, the director of research at the U.S. Naval Academy’s Stockdale Center for Ethical Leadership.

Using sources in philosophy, history, poetry and literature as a backdrop, the program allows combat veterans to come together for two days to talk about what they have read prior to assembling. The readings, which focus on World War I and the more recent U.S. conflicts in Iraq and Afghanistan, have proven cathartic for veterans previously unable or unwilling to openly speak about their own similar experiences endured in combat.

A trained group of facilitators directs each conversation.

“The point is to allow people to share their experiences however they do it best,” Kirkpatrick said.

Ian Fishback, who served four combat tours in rising to the rank of major in the U.S. Army, admitted to being a little unsure when first talking with Kirkpatrick about the program a few years ago, but has quickly bought in. He now helps train dialogue leaders.

“It’s good to get together with like-minded folks with similar experiences,” he said.

Caroline Johnson was a Weapons Systems Officer serving in the backseat of a Navy F/A-18 when she became the first woman to employ weapons against ISIS in 2014. She was one of just three female flyers aboard a U.S. aircraft carrier that housed roughly 5,000 sailors when she took part in the initial U.S. military strikes into Syria.

Now teaching at her alma mater, the U.S. Naval Academy, Johnson admitted to grappling with feelings of abandonment after coming home following the intense camaraderie of war.

She had no idea what to expect after a colleague initially told her about the “Coming Home” project, but has been thrilled hearing so many diverse experiences.

“It’s been so enlightening,” said Johnson, who is now training to serve as one of the project’s moderators. “I’m so pumped to be a part of it. I’ve never really been a poetry person. I’ve always been very literal, but I’ve been struck by the poetry about these war experiences. It’s all been so poignant and I see so much value in it.”

The project, which is funded in part by a grant from the National Endowment for the Humanities, is still accepting applications to participate in the dialogues at cominghomedialogues.com/register.