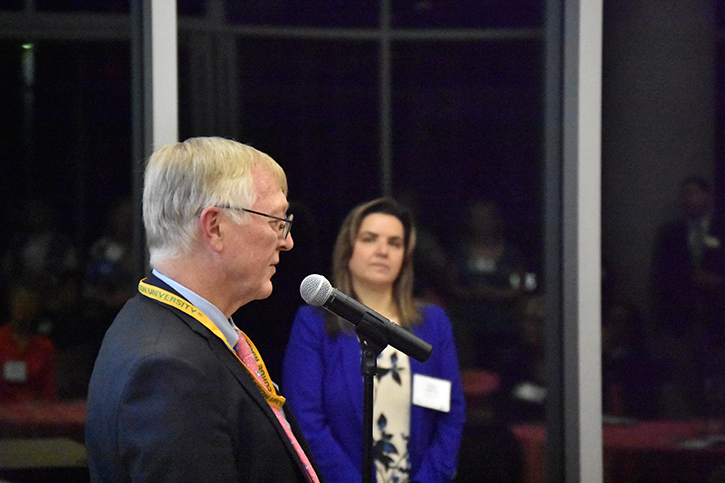 Chris Jones, foreground, speaks at the grand opening of the Potomac Science Center about the endowed scholarship he established to honor his late wife, Ann C. Powel, while College of Science Dean Peggy Agouris looks on. Photo provided by College of Science.

Many local marine biology and ecology teachers and their students will benefit from the legacy of a George Mason University alumna and longtime elementary school teacher through a new fellowship program. The Ann C. Powel Memorial Scholarship Fund enables a K-12 teacher to spend a summer at the Potomac Environmental Research and Education Center (PEREC), thanks to director R. Christian “Chris” Jones’ endowment in his late wife’s name.

Jones recently finalized the $100,000 endowment that will annually offer a teacher the chance to work with one of the PEREC researchers during the summer. The stipend will allow the selected teacher to spend the summer researching aquatic systems while working with faculty members and devising a cumulative lesson plan that can be taken back to school in the fall and shared with students and other teachers via PEREC’s website.

Jones said he could think of no better tribute to his late wife of 25 years, who passed away in December 2013 after a lengthy illness.

“When you lose your spouse, you want to do something to celebrate her life,” Jones said.

Powel, who had earned undergraduate and master’s degrees at George Mason, had been an ardent fan of marine research since spending a summer in North Carolina at the marine lab run by Duke University and working daily with staff members there.

“She just found that incredibly inspiring and motivating,” Jones said.

Keenly aware that his wife had paid her own way for such a very memorable experience and that not all teachers could afford to do likewise, Jones wanted to make that kind of opportunity available to more educators.

Summer 2017 will mark the first time the stipend has come directly from the Ann C. Powel Memorial Scholarship Fund.

“It’s the best way to honor her,” Jones said.

The news of the finalized endowment was just one of several recent milestones for PEREC, including the opening of the new Potomac Science Center a few weeks ago. The $32 million, 50,000-square-foot waterfront building serves as the new home for both PEREC and the College of Science’s Center for Geospatial Intelligence.

Additionally, the center recently received a grant of roughly $160,000 from Alexandria Renew Enterprises, a water resource recovery utility that works to improve local water quality. Jones and his team have been tasked with studying water quality and aquatic biota and how they relate to discharges into the Potomac River.

The grant complements an existing grant of $75,000 that PEREC received from Fairfax County’s Department of Public Works to collectively help fund the bulk of the center’s monitoring of the Potomac River, Jones said.