An online window into autism 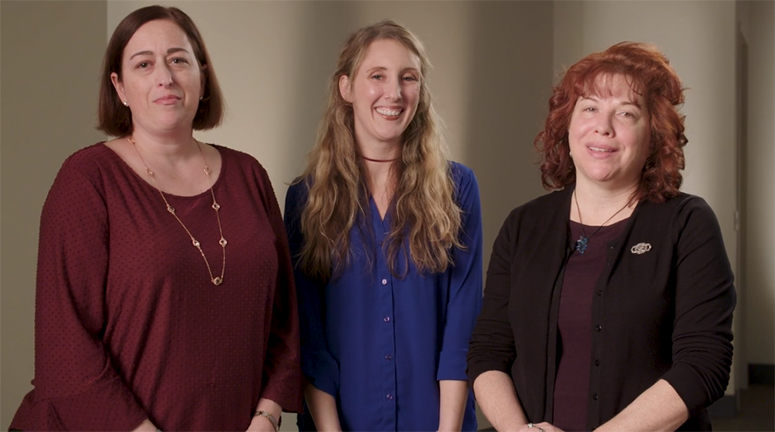 Faculty in George Mason University’s Special Education Program faced a challenge when it came to introducing students to individuals with autism as part of the online track of the autism spectrum disorders (ASD) graduate certificate.

“The best way to learn about autism spectrum disorder is to meet people who have it,” said Jodi Duke, an associate professor in the Division of Special Education and disAbility Research and the coordinator of the ASD graduate certificate in the College of Education and Human Development.

“Every person on the spectrum is so different,” Duke said. “We really believed we could not prepare people to work with individuals with autism without a lot of exposure.”

Faculty agreed that embedding videos into the online course work was the best solution, but they found that source material was limited, with available videos focusing more on the characteristics of autism than the people. Faculty made their own videos on their phones to use in their classes but wanted more robust material.

Mason’s online partnership with Wiley Education Services, which started in 2017, opened up new avenues for content creation, with support services that included media resources for partner programs. As one of two tracks within the college’s MEd in special education that would be going fully online with Wiley, the ASD certificate would have video production at its disposal.

“Wiley said to us, ‘If you could create anything, what would it be?’” said Duke. “Immediately, we all thought—we’ve got to have video. Real people.”

What they really wanted was a case study that would give students an insider’s look into the lives of people with autism. They imagined featuring individuals at different ages with different levels of support needs. They wanted not just a view from the classroom, but at home, in interviews, in the community and at work.

Wiley team members worked with faculty to decide what should be filmed and where and how to integrate the footage into the courses.

“That was a really complicated design process that I don’t think we could have done on our own,” said Duke.

Working together, they arrived at the concept—students would be introduced to four different individuals with autism on the first day of class. Their stories would be woven into all five of the certificate courses, giving students the opportunity to witness the impact of autism on the individuals and their families as they moved through their days. Learn more about the content development in this video. See a Wiley video about the content development.

In spring 2018, the ASD students met Brooke, a nonverbal 9-year-old girl who communicates using sign language and assistive technology; William, an 8-year-old autistic boy, and his dad, who is also on the spectrum; Jake, a teenager who is helping the Montgomery County Police Department in Maryland better understand people with autism; and Alli, a Mason undergraduate who is living on campus and working as a teaching assistant.

“The students get to see the full picture of these folks,” Duke said. “They get to see their incredible strengths, but they also get to see the challenges and how each of us, when we were interviewing or interacting with them, got to work with them.”

The participating families, who were identified through networking and listservs, were motivated by a desire to help others understand autism better. They provided access to brain images, diagnoses, evaluations and assessments, all for student study. This unprecedented access allows students to assess the individuals and identify the appropriate tools to deal with the behaviors.

“We are able to provide all these perspectives,” Duke said. “In a traditional face-to-face class, I can send you out into a placement, but you still wouldn’t get that full picture.”

Students say that getting to know the individuals is their favorite part of the class, and Duke reports that the videos have helped the students produce deeper and richer analyses.

“The video series has afforded me such a rich opportunity for gaining a clear understanding into the lives of individuals with ASD and their families,” said Michelle Gutierrez, a graduate student in the Special Education Program.

Gutierrez, the mother of two special-needs children, said she plans to use the knowledge in a career as a special-needs advocate. “Having the opportunity to see these families in their own environments was such an enormous privilege,” Gutierrez said. “I can only hope to honor that with a continued commitment to helping families thrive in our communities.”

Because of the success of the project, Duke and the Wiley video crew have been asked to present at the Online Learning Conference in Denver, Colorado, this spring.

“The partnership has been tremendous,” Duke said. “This whole video process has been the highlight for us because it has really taken a program that we had sort of conceptualized before and elevated it to such a different level.”

Duke said that the faculty hope to work with the Wiley video crew again in the future.

“We’d love to go back in a couple of years and do a follow up, because the other part of the story is, this is a lifelong situation, and so the needs and challenges will change.”