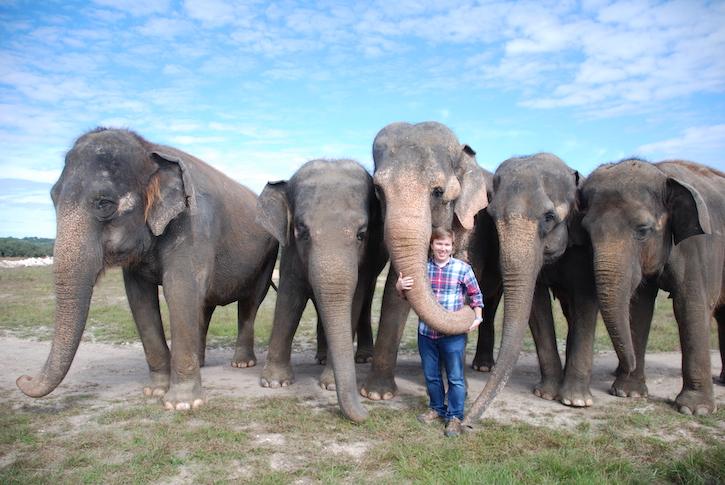 Around the world, environmental crises are making headlines, from the potential extinction of species and ecosystems to climate change. Students in George Mason University’s Department of Environmental Science and Policy (ESP) are driven to make a change.

This year five PhD students in the department received grants from the Cosmos Club Foundation to tackle a wide range of conservation efforts.

In any given year, Mason has received one or two Cosmos grants, said Kathryn Agoston, director of Graduate Fellowships. “To earn five is very exciting.”

The role Mason students play in helping the earth is extremely fundamental, said A. Alonso Aguirre, ESP department chair. Mason’s top-tier faculty, R1 research status and unparalleled opportunities in the backyard of the nation’s capital help take their impact to a new level, he said.

“Now more than ever you see the passion of students to work with species and ecosystems that are threatened, mostly by human impact,” Aguirre said. “They are committed to solving actual problems.”

The Cosmos Scholars grant program is open to graduate students in the Washington, D.C., area in all fields of study. Mason’s Office of Graduate Fellowships is also available to help students secure similar funding opportunities.

“The goal is to provide applicants with the support they need to put forward the strongest possible application,” Agoston said, adding that some awards qualify for additional university support including tuition assistance and health insurance. “We have policies in place to help ensure that these costs do not create a barrier to our students accessing prestigious, nationally competitive awards.”

Here is how Mason’s Cosmos Scholars are making an impact: 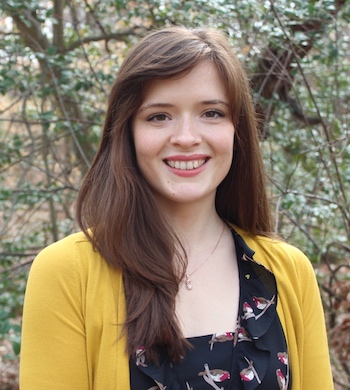 In one of her first graduate classes on disease ecology, Meadhbh Molloy read a paper projecting the extinction of Tasmanian devils. An aggressive and highly contagious facial cancer would likely be the cause of termination within a couple decades, the researcher estimated. The species is endangered, but they have not become extinct.

“[The cancer] spreads like crazy and almost always leads to death,” Molloy said. “But [Tasmanian devils] are persisting in the wild, and no one really knows exactly how.”

Since the class, Molloy said she became fascinated by how species co-evolve with diseases.

“When I learned that diseases were in a way caused by pathogens trying to survive, I started to understand their role in ecology and how they’ve shaped the evolution of other life forms,” Molloy said.

Through the Cosmos grant and an award from the American Australian Association, Molloy will spend up to a year in Australia, working in a lab at the University of Sydney, where she will be analyzing devil fecal samples. She will also be potentially looking at the species’ microbiomes and parasite loads to see if there are differences between diseased wild devils and cancer-free wild devils.

“It’s all about making sure they are successful when they’re released into their native habitat,” said Molloy, who first realized she could have a career with endangered species after a field trip and Mason courses at the Smithsonian-Mason School of Conservation. 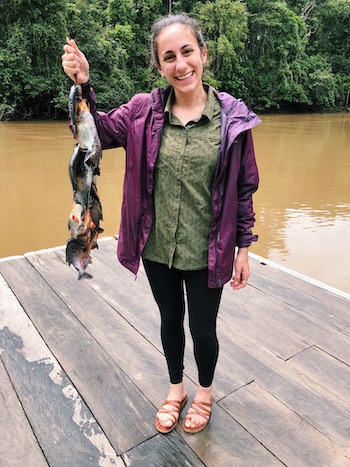 Tovah Siegel:
Her own best advocate

Tovah Siegel had never met or spoken to Thomas Lovejoy, and knew him only as the world’s preeminent conservation biologist. But that did not stop Siegel from emailing the Mason University Professor to ask if he would be her advisor as she pursued her PhD in environmental science and policy at Mason.

One return email and three or four phone calls later, he agreed.

“You have to advocate for yourself,” Siegel said.

Siegel, who is from Oregon and earned her undergraduate degree in biology from the University of Puget Sound in Washington, is studying the interactions of species and how forest fragmentation in the Brazilian Amazon impacts those interactions.

Siegel, who previously used a Boren Fellowship to take field courses in the Amazon, will continue her research with the help of the Cosmos grant and under the guidance of Lovejoy, who immediately put her at ease.

“I wouldn’t want an advisor who thought they were too good to talk to someone who was super interested in what they do,” said Siegel, who hopes Mason’s proximity to Washington, D.C., will help her land a job as a government conservation policy advisor. “So if he said, ‘I don’t want to talk to you,’ I would have said, ‘This isn’t the person for me.’ But he was so willing.” 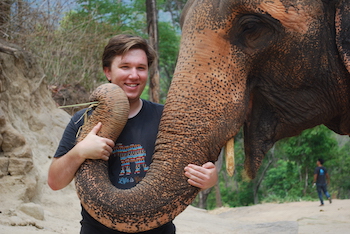 Chase LaDue:
Where the Elephants Are

African elephants have had a time in the spotlight when it comes to research and media, due to the ivory crisis. But a different elephant species doing worse in terms of survival has received far less attention. Chase LaDue is changing that with his research of male Asian elephants in Sri Lanka.

“I study male Asian elephants in particular because they’ve been less studied than African elephants, and male elephants are unique because they go through this period called musth,” said LaDue, a Dallas native. “It’s completely unique, only elephants do it.”

Musth, which means “intoxicated” in Urdu, is similar to rutting season for a deer, LaDue explained. Testosterone levels and aggression are high, but unlike for other animals, there is no predictable musth season.

Elephants in musth can also pose an economic burden, he said.

“Elephants will raid farmers’ crops, so that can be dangerous to the people that live around elephants, and a single elephant can wipe out a farmer’s crop for the entire year,” LaDue said.

Through behavioral observations and analyzing hormones in fecal samples, LaDue will examine what environmental and social factors influence musth. Because Asian elephants are classified as endangered by the International Union for Conservation of Nature, the findings could also contribute to understanding how to better conserve their populations.

This year marks the second time LaDue has earned a Cosmos grant. He also received a Fulbright scholarship to go to Sri Lanka in 2019, but had to return to the United States early due to terrorism in the country. Being able to continue his studies is both validating and rewarding, he said. 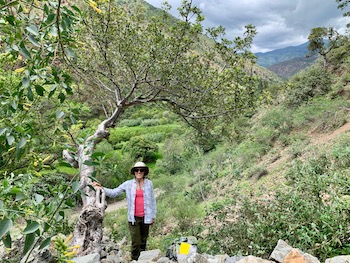 Collins standing next to a palo santo tree in the Marañón Valley, Peru. Photo provided.

From churches to yoga studios to individual homes, communities have been burning palo santo—holy wood—for generations. The South American plant similar to frankincense and myrrh is primarily used as incense, and it has been so widely marketed that its populations are declining due to habitat loss. Betsy Collins hopes her research can help save the species.

“It’s really important when you’re planting for reforestation that what you’re planting is genetically diverse,” said Collins, who is from West Palm Beach, Florida. “I’m looking at comparing the genetics of the replanted populations with the natural population to see [whether] they are in line or can be doing better in our reforestation projects.”

A National Geographic grant in 2018 took Collins to Peru, Mexico and Colombia to collect leaf samples and preserve the plants’ DNA. With her Cosmos grant, she will work in Mason’s labs to extract and analyze the DNA from those hundreds of samples, she said.

“No country has unlimited sources for conservation,” Collins said. “I hope that this research can give some ideas as to where are some really unique genetically diverse populations that we should look at protecting.”

Charles Coddington:
Flocking to the Amazon

Birds of a feather may flock together, but to avoid predators, birds of different species will do the same. Once at their destination, Charles Coddington wants to know how deforestation and habitat fragmentation affect them.

“One of the most critical [threats] to conservation is the loss of diversity,” said Coddington, who graduated from Mason in 2018 with a master’s in evolutionary biology and returned to the university for his PhD. “I hope that my research will help contribute to better restoring biodiversity to fragmented landscapes.”

Mix-species flocks are found on every continent except Antarctica, Coddington said, and they are especially prevalent in the Amazon. Hundreds of birds and dozens of species fly there, he said.

Going into Amazonian forests, Coddington will study how these birds use regenerating forest fragments, and how their nesting behaviors are affected in forests that have developed naturally (primary forests) versus forests recovering from human disturbances (secondary forests).

After finding the nests, Coddington said he will set up camera traps to record what happens when predators are near. He will also set up artificial nests in primary and secondary forests “to see if predation is one of the limiting factors that’s preventing [birds] from successfully breeding in secondary forests.”

The opportunities Coddington has had at Mason, including a fellowship with the Smithsonian-Mason School of Conservation, and the Cosmos grant, have allowed him to foster a community and conduct meaningful research, he said.

“This is the time to get involved in conservation of species and ecosystems as many factors are threating the health of all,” Aguirre said.