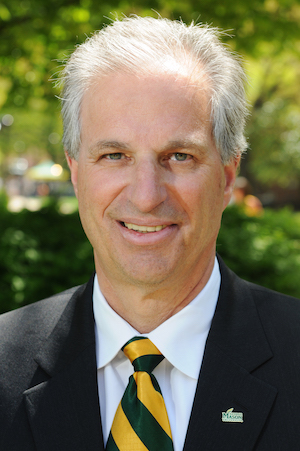 Ginsberg, whose career spans more than 40 years as a professor, psychologist and administrator, will assume his new position April 15. As CEHD dean since 2010, he oversees more than 135 full-time instructional faculty and nearly 4,500 students across 30 academic programs and 10 research centers, including the largest and most comprehensive School of Education in Virginia. CEHD also includes the School of Kinesiology and the School of Sport, Recreation, and Tourism Management.

“Under Dr. Ginsberg’s guidance, Mason has emerged as an innovative national leader in educator preparation, special education, counseling and school leadership, among other areas,” said Holton, who during her search for an interim provost gathered input from across the university. “I know Dr. Ginsberg will bring to his new role the same vision and commitment to the Mason mission that he has displayed in CEHD over the past decade.”

Ginsberg succeeds S. David Wu, who on Feb. 3 was named president of Baruch College in New York. To assist in the transition, Wu will remain at Mason on study leave until he assumes the Baruch presidency on July 1, the same day Washington officially begins his presidency at Mason.

“I am excited to begin my new role and to support our entire university community,” Ginsberg said. “Certainly, with COVID-19 as a backdrop, we all will need to confront many new, unexpected and unpredicted challenges as we also seek new opportunities while adjusting and adapting to a ‘new normal.’ Extraordinary times challenge extraordinary people to do extraordinary things. I am very proud to be part of an extraordinary university and community. I look forward to working as hard as I can to help our university successfully meet the challenges of today as we prepare for the opportunities of tomorrow.”

Mason in recent years also developed a digital literacy program for Virginia’s teachers through a $1 million National Science Foundation grant, an achievement that reinforces the state’s commitment to growing the digital economy and highlights Mason’s role as the largest producer of tech talent in the state.

Ginsberg has served as the executive director and CEO of both the National Association for the Education of Young Children (NAEYC) and the American Association for Marriage and Family Therapy (AAMFT). He also served as chair of the Department of Counseling and Human Services in the Graduate Division of Education at the Johns Hopkins University and as a faculty member in the School of Medicine. He currently is the vice chair of the respected national organization, Parents as Teachers, and a member of the board of directors of Hopecam, a national organization supporting children with cancer and other serious illnesses.

Ginsberg is a former chair of the board of directors of the American Association of Colleges for Teacher Education and served as a member of the executive committee of the Council of Academic Deans of Research Education Institutions (CADREI) and the board of directors of the Virginia Early Childhood Foundation (VECF). He also is a past president of both the International Step by Step Association (ISSA), a nongovernmental organization of education and child/youth development focused NGOs in Europe and Central Asia, and the Society of Psychologists in Management (SPIM).

Mometrix Test Preparation in 2015 named Ginsberg to a list of the “30 Most Influential Deans of Education in the United States.”