Mason experts weigh in on the nutrition profile of cicadas

This year, billions of Brood X cicadas emerged in the United States and generated quite a buzz, according to environmental experts. They also prompted questions about whether they are safe to eat, and who would want to eat them.

It’s safe for most people to eat insects, including cicadas, said Margaret Slavin, an associate professor in the Department of Nutrition and Food Studies in George Mason University’s College of Health and Human Services.

“Cicadas and other insects contain high-quality protein,” said Slavin. “Insects are generally considered to be good sources of protein, fiber, and minerals. They are commonly eaten in other places around the world for their nutritional qualities and their taste.”

Tweets from the U.S. Food and Drug Administration (FDA) point out that eating too much of the exoskeleton can be irritating or even a choking hazard. Also, the FDA cautions that people with seafood allergies shouldn’t eat cicadas because they might also be allergic to insects.

Sapna Batheja, term assistant professor in the Department of Nutrition and Food Studies, agrees, noting that the insects share a family relationship with shrimp and lobsters.

Batheja said the insects are harmful to dogs if they are consumed in large quantities, and may cause stomach aches, nausea, vomiting, diarrhea, lethargy, and poor appetite.

Batheja also had some guidelines for human consumption of cicadas.

“To cook cicadas, it is recommended to freeze them first to kill them humanely,” said Batheja. “The next step would be to cook them by either grilling, roasting, frying or boiling them."

Batheja and Slavin said cicadas can be a healthy food alternative.

“The teneral [post-molting] and nymph stages are ideal for eating; however, these are short-lived phases of the cicada,” said Batheja. “You can eat a full-grown adult cicada, although there is a higher risk that they will be infected with a fungus. Pesticides may also be a concern, but you can gather cicadas from a place that has not been treated with fertilizer or chemicals.”

Restaurants that serve cicada-inspired meals are “a great way for individuals who are curious about their taste to try them without having to experiment with catching and cooking them themselves,” said Batheja. “Some individuals describe the flavor of cicadas as nutty, with a hint of asparagus taste to it. Others proclaim that they do not have a ton of flavor, so you can add different spices, flavorings or sauces.”

Slavin added that insects are considered a more environmentally sustainable source of protein than livestock like cows, pigs, chickens. 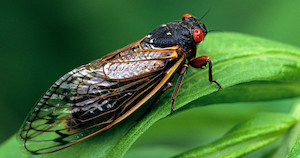 According to Batheja, “there was a push in 2013 by the United Nations to promote insects as an inexpensive and sustainable protein source, and there are a variety of bug powders and snacks that have been on the market over the past several years.”

“Eating cicadas once every 17 years won’t solve our current challenges surrounding food security and sustainability,” said Slavin, “but the novelty of it may help to educate people about edible insects being a possible way for us to address these important issues of our time.”

Margaret Slavin is an associate professor in the Department of Nutrition and Food Studies, and an affiliate of the Center for Study of Chronic Illness and Disability and the Krasnow Institute. Formally trained in both food analytical chemistry and clinical nutrition, Slavin’s expertise are primarily focused where food science and nutrition overlap to improve human health. She can be reached at mslavin@gmu.edu.

Sapna Batheja is term assistant professor in the Department of Nutrition and Food Studies. Batheja’s research interests are how to leverage technology to create dietary behavior changes and impact overweight and obesity. Batheja, a registered dietitian, has extensive experience in a variety of Washington, D.C.-based community settings, including schools, policy, and grant management. She can be reached at sbatheja@gmu.edu.

George Mason University is Virginia’s largest public research university. Located near Washington, D.C., Mason enrolls 39,000 students from 130 countries and all 50 states. Mason has grown rapidly over the past half-century and is recognized for its innovation and entrepreneurship, remarkable diversity and commitment to accessibility. Learn more at www2.gmu.edu.