New Mason IT grad says ‘just go for it’ 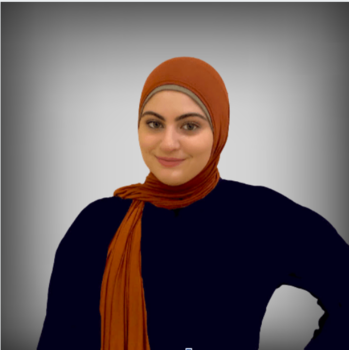 It was a friend’s serendipitous homework assignment that had Dania O Abu-Irshaid, upcoming George Mason graduate from the Department of Information Sciences and Technology, switch her undergrad work from pre-law to a STEM path.

She says she’s always had a natural knack for coding, and it’s something that’s always interested her. But when she helped a fellow Mason student with a Python coding exercise, that’s when it clicked.

“I was thinking about pre-law, but after taking a class in it, I didn’t feel like it suited me. I was undecided,” says Abu-Irshaid. “Then my friend was struggling with this homework assignment and I ended up finishing it for her in five minutes. She looked at me and said, this is what you should be doing.”

When Abu-Irshaid made the move to study IT, with a concentration in cybersecurity, that’s when things really picked up for her. As the oldest child in her family, she was relied on to be the tech savvy expert and help fix wifi routers in the house or explain internet nuances to her parents. Although she is the first female in her family to study and work in STEM, she’s confident of the opportunities coming her way.

After graduation, Abu-Irshaid will enter a ten weeklong internship with the Virginia Department of Elections, where she will work in the cybersecurity sector. She also sees potential for a corporate position with one of the big contenders—namely Walmart. As a resident advisor at Mason to freshman engineering students, Abu-Irshaid says some of her mentees good naturedly tease her about her Walmart aspirations to this day.

“I’m like, guys, Walmart isn’t just about celery and sticky buns, they have a corporate side,” she says. “But they’ll still ask me how Walmart’s going and what kind of merchandise I have.”

With a bright future ahead, she says she’ll miss her time at Mason, particularly the diverse community and her role as an advisor.

“I love the community and culture at Mason. There’s always something to do, and something to look forward to on campus. But I’ll hopefully be back, in some capacity,” says Abu-Irshaid.

Her message for future grads is to just go for it, whether it’s a job, course of study, or opportunity.

“It’s really as simple as that, and it’s what got me everywhere,” she says. “Just go to that club meeting, go to that class, ask your professor that question. You’re not going to get the results unless you go for it.”