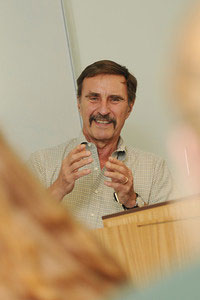 Physicist and author James Trefil is known for his writing and his interest in teaching science to nonscientists. He accepted an offer of a Robinson Professorship in order to develop a new kind of science curriculum for general education, one based on developing scientific literacy among college graduates. Joined later by Robinson Professor Robert Hazen, he developed a course and textbook series that is now being used in approximately 200 colleges and universities around the country. Science Matters: Achieving Scientific Literacy, was co-authored with Robert Hazen in 1991, and in 1995 they published the textbook The Sciences: An Integrated Approach (now in the 4th edition).

Dr. Trefil’s A Scientist in the City appeared in 1994. Are We Unique?: A Scientist Explores the Complexity of the Human Brain appeared in 1997. He is a Fellow of the APS and a former Guggenheim Fellow. His numerous books and articles include works written for general audiences. He co-authored The Dictionary of Cultural Literacy (4th ed., 2003) and in 1992 published The Facts of Life (Harold Morowitz, co-author).

The National Geographic Society published his book Other Worlds: The Solar System and Beyond in 1999. In 2002 he was the general editor of The Encyclopedia of Science and Technology, co-author of Good Seeing, a scientific history of the Carnegie Institution, and author of The Laws of Nature. His new book, Human Nature: Managing the Planet by and for Humans, was published by Holt in May 2004. He is a regular contributor to Smithsonian Magazine and was previously University Professor and Professor of Physics at the University of Virginia. He is Chief Science Consultant to a new middle school science curriculum being developed by McDougal-Littel and Houghton-Mifflin Publishing.

Dr. Trefil is a frequent keynote speaker at educational conferences and lectures to members of the federal and state judiciaries on the connection between science and the law. In 2000 American Institute of Physics chose him to receive the Andrew W. Gemant Award, presented for outstanding and sustained contributions in bridging the gap between science and society. In 2003-2004, he was a Phi Beta Kappa Visiting Scholar.