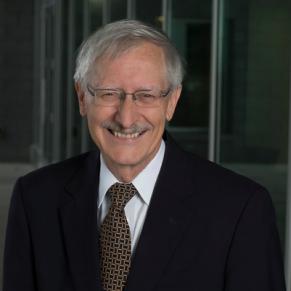 Ambassador Richard Kauzlarich is Distinguished Visiting Professor in the Schar School of Policy and Government at George Mason University, where he teaches courses on the geopolitics of energy security and policy communication for executive leadership.

Since 2014, he has been co-director of the Center for Energy Science and Policy (CESP). He served as deputy director of the Terrorism, Transnational Crime and Corruption Center (TraCCC) at Mason from 2011-13.

Before that position, he was director of the Special Initiative on the Muslim World at the United States Institute of Peace. Kauzlarich joined the Institute in spring 2002 after a 32-year career in the Foreign Service. He served as United States Ambassador to Bosnia and Herzegovina in 1997-99 and to Azerbaijan in 1994-97. He was senior deputy to the Secretary of State’s and the President’s Special Representative to the Newly Independent States (NIS) in 1993-94. He was deputy assistant secretary of state in the Bureau of European Affairs in 1991-93, responsible for relations with the former Soviet Union and economic ties with the European Union. He also was a member of the U.S.- Russian Joint Commission on POWs.

In addition to his ambassadorial assignments, Kauzlarich has served at U.S. Embassies in Ethiopia, Israel, and Togo.

In December 2001, the Century Foundation published his report, "Time for Change? U.S. Policy in the Transcaucasus.” He is a coauthor of Aid During Conflict: Interaction Between Military and Civilian Assistance Providers in Afghanistan, September 2001-June 2002, published by RAND in 2004. In 2017, he contributed a chapter on U.S. policy toward the South Caucasus in The New Geopolitics of the South Caucasus edited by Shireen T. Hunter.

Kauzlarich was a nonresident senior fellow at the Brookings Institution in the Foreign Policy program working with the Center on the United States and Europe, and a visiting fellow at the Joint Forces Staff College of National Defense University.

Kauzlarich received his AA from Black Hawk College, his BA from Valparaiso University, and MA degrees from Indiana University and the University of Michigan.