Smithsonian museum is ‘in good hands’ with Spencer Crew 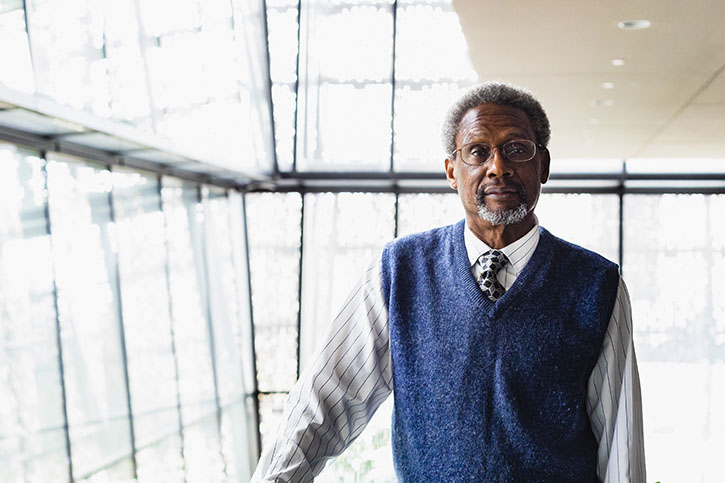 Spencer Crew, Robinson Professor, will take a leave of absence from Mason to lead the National Museum of African American History and Culture during the search for a permanent director. Photo by Lathan Goumas/Strategic Communications.

Emmett Till’s casket, the dress Rosa Parks was making on the day she refused to give up her seat on a bus in Montgomery, Alabama, a segregated Southern Railway rail car from the Jim Crow era and stools from the Greensboro, North Carolina, lunch counter that spawned sit-ins across the South in protest of segregation.

Each were powerful artifacts in their own right that told a unique aspect of the African American experience, but it was George Mason University’s Spencer Crew who worked tirelessly for years as a guest curator at the National Museum of African American History and Culture to bring them together for what might collectively be the museum’s most powerful display. Rich with history, the exhibition perfectly captures the struggles African Americans endured from Reconstruction to the Civil Rights Movement of the 1960s while carving a niche for themselves in the nation.

“This is a museum that tells the African American story,” said Crew, Robinson Professor of American, African American and Public History, who was recently selected to succeed his good friend, Lonnie G. Bunch III, and become the interim director of the National Museum of African American History and Culture. “But it’s told in a way that all Americans could understand.”

Crew’s journey of more than 25 years of museum experience began in 1981 with his hiring as a historian by the National Museum of American History.

“I came for a year, just to see what I thought of the place, and I fell in love with it,” he said.

An active member of the academic and cultural communities, Crew served as president of the National Underground Railroad Freedom Center for six years and worked at the National Museum of American History for 20 years, including nine as its director. He has published extensively in the areas of African American and Public History, writing and creating exhibitions on both the Underground Railroad and the migration of African Americans to the North during and after World War I.

Crew will take a leave of absence from Mason this fall as Smithsonian officials begin a national search for Bunch’s permanent replacement.

“Spencer Crew has contributed in so many important ways, both as a scholar and as a museum professional, to the preservation of African American history over the course of his distinguished career,” she said. “It’s exciting to have one of Mason’s most distinguished faculty take on this important leadership role at our nation’s newest museum.”

Crew said he was stunned when Bunch first approached him about becoming his temporary successor.

“We are friends and we talk about a lot of things, but that came as a surprise,” Crew said. “A nice surprise, a wonderful surprise. I just feel honored that he would ask me to take on that responsibility.”

Bunch said the museum will be in fine hands.

“We have someone who can lead the organization, that can help it continue its fundraising, its programmatic initiatives,” Bunch told The Washington Post. “I’m very comfortable. Not only is [the museum] in good hands with its leadership, but the staff there, who I hired, is really wonderful. And they are able to carry on the vision of the museum.”

Since its opening in 2016, the National Museum of African American History and Culture has welcomed more than five million visitors. The nearly 400,000-square-foot museum on the National Mall is the nation’s largest and most comprehensive cultural destination devoted exclusively to exploring, documenting and showcasing the African American story and its impact on American and world history, according to museum officials.

“I’m pleased that they trusted me enough to ask me to sort of be in the breach as the director goes to be the secretary of the Smithsonian,” Crew said. “It’s such an important place, and I’m really excited to able to help. The challenge is to maintain the interest in it and the quality of work.”