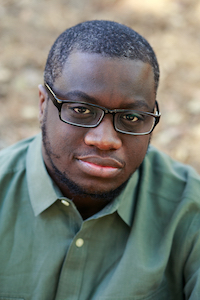 Those who have been to Cross River know that you can’t get there by traditional means of transportation like plane, train, or automobile. To visit that historic town in Maryland, you’ll have to peer between the pages of the short story collections of George Mason University alumnus Rion Amilcar Scott—author of the prize-winning “Insurrections” and the newly released “The World Doesn’t Require You”—the latter of which has already received much praise from such outlets as the New York Times, Southern Living, and Kirkus Reviews.

Scott, a graduate of Howard University who received his MFA in Creative Writing from Mason in 2008, said he can trace the fictional town’s inception to his time as a student in the Creative Writing Program. “I definitely didn’t come in with that idea…. Mason somehow brought that out in me.”

He said the community of writers he found, and the out-of-classroom conversations he had with close friends from the program, helped solidify a concept he had long been thinking about. “You’re in this community, and you’re ensconced, and you feel safe and you feel uplifted…. It was a very good experience.”

From some angles, Scott’s arc of success since his graduation from Mason may seem like a straightforward line. But he stressed that before winning the PEN/Robert W. Bingham Prize for his debut collection and widespread praise for his second book, the moments of self-doubt were many.

“There were a lot of ups and downs; there were some moments where I didn’t feel any passion for writing. And it felt like it was going nowhere, getting me nowhere. I was sacrificing a lot of time and effort. But I knew that I would be excited again, so I kept going until I got to that point where I was excited.”

His persistence has brought him full circle. In mid-September, Scott will return to Mason as part of the Creative Writing Program’s biannual Visiting Writers Series, which partners with University Libraries to bring writers of fiction, nonfiction, and poetry to conduct a workshop with current MFA students and hold a public reading of their work.

The series is especially valuable for students, according to Mason English professor Art Taylor, MFA ’06, who says the Visiting Writers workshop “provides our MFA students opportunities to interact…with fine writers beyond our faculty—to different approaches, different perspectives, even different aesthetic values, all of which can help them to enhance their own craft.”

Scott is no stranger to teaching, having spent the last decade in the classroom teaching composition and creative writing to undergraduates at Bowie State University and, starting this fall, at the University of Maryland. Of his teaching style, he looks to his former professors in the MFA program, including Courtney Brkic, Susan Richards Shreve, Steve Goodwin, Mary Kay Zuravleff, and the late Alan Cheuse, saying, “Each gave me something in a different way…. I borrow a lot from them in teaching.

“In creative writing it’s as much about the pedagogy as it is about the encouragement. It’s really about building up your student.”

Rion Amilcar Scott will present an evening reading on Thursday, September 19, at 7:30 p.m. in Fenwick Library Reading Room on the Fairfax Campus. He will also be on campus for multiple events for Fall for the Book on Saturday, October 12.